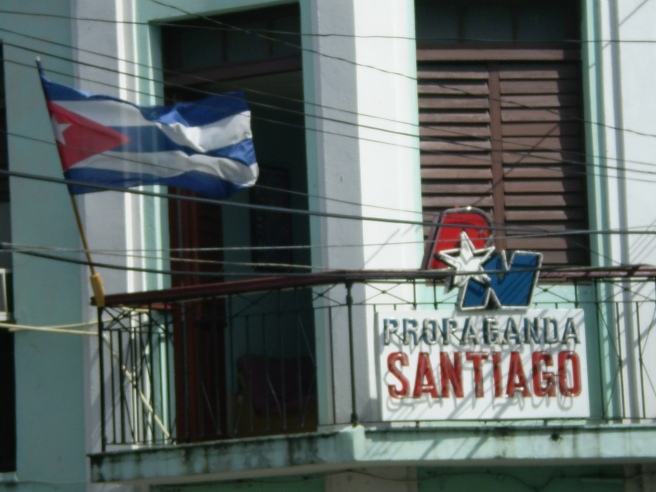 Watching five in a row.

I enjoyed this enormous cinematic privilege on a brutal bus ride from Santa Clara to Santiago, Cuba.

The first artistic treat began once we swung on to the highway and the driver switched on a fast paced, high kicking drama delivered in a Belgian accent, the name of which I can’t remember.

I was content to settle into my seat and enjoy this matinee performance as I knew the bus wasn’t scheduled to arrive in Santiago until well into the evening. Plus I was seated near the aisle, right behind the driver so enjoying the scenery wasn’t really an option.

Thus, I enjoyed the first movie until intermission; a dinner stop at a local road side restaurant.

Dinner was average but I consoled myself with the knowledge that I could enjoy the gripping conclusion to the film once back on the bus.

Just as I was deciphering the intricate details of the plot, however, I was distracted by the 4-year-old local boy on his grandmother’s lap beside me. The wild young kid was thrashing about and kicking the Perspex window behind the driver.

His grandmother tried her best to stop him but this kid was out of control.

The bus stopped. The locals hissed their displeasure. The grandmother assured the driver the kicking would stop.

Then the bus took off and the next Van Damme movie began. A fast paced, high kicking drama delivered in a Belgian accent, the name of which I can’t remember.

I was enjoying this movie as dusk descended upon the fields outside, but was then rudely interrupted again by the wild child to my left.

When the bus resumed its journey and Jean-Claude resumed his heroics, the grandmother told me that she had taken her grandson to a psychologist in Santa Clara to determine whether he had a condition such as ADD/ ADHD.

I think we knew the answer.

Little wild child kept thrashing and yelling and kicking, more wild than any of the kicking on screen.

Finally the driver got fed up and stopped the bus again.

This time he told the pair that they would have to move to the rear of the bus because the driver was too distracted to drive safely.

‘Gracias a Dios’ I sighed, finally some peace. I wouldn’t have to put up with wild child and I could finally concentrate on the dramatic nuances of film number 2, which was drawing to a close.

Then two local adults moved to the front of the bus to change seats with my neighbours.

Me, why do I have to move as well? Surely it is abundantly clear that I, as a (very) white man am in no way related or connected to the boy and his Nan.

I tried to protest because I knew we were not even halfway to Santiago and the boy was becoming worse as he grew tired and irritable.

But, alas, I had no choice, as evidenced by the loudening hisses from the remainder of the agitated locals on the bus.

To another aisle seat at the back of the bus.

With no view to enjoy from my position and with darkness descending outside, I settled back and stared at the screen for film number 3. A fast paced, high kicking drama delivered in a Belgian accent, the name of which I can’t remember.

The only thing I remember about this film is that our protagonist used a carrot to assert his will over his assailants. As you do.

I pondered the relative merits of a carrot versus a conventional weapon before my long, uncomfortable journey became even more unpleasant.

I never enjoyed being hissed at in Cuba. It was even worse than Mexicans attempting to gain my attention by calling “gringo” or the people of Southern Zimbabwe calling me “Kiwa”, which apparently means ‘provider of money’. But I found hissing more displeasing.

However, I was about to discover something even worse than hissing.

Just as film number 4 was about to start, the man in front of me had decided that he was by now sufficiently well-versed in the Van Damme genre and would like to rest. However, instead of turning around to indicate to me that he was about to recline his seat all the way, he reached down and tickled my ankle.

I didn’t protest to him lowering his seat, I was too freaked out.

So as film number 4 rolled on and Jean-Claude showed off his entirely unnatural flexibility, I was trapped beside a wild child who wouldn’t sleep and who destroyed any remote chance I may have had of doing the same – and now I had even less leg room.

I just wanted to get off this damn bus.

I also hoped the guy in front of me would fall asleep soon and would not be tempted to touch me again.

All I could do was sit bolt upright with a sore back and legs and enjoy the fourth film featuring the muscles from Brussels. A fast paced, high kicking drama delivered in a Belgian accent, the name of which I can’t remember.

And so it passed. Uncomfortable. Frustrating. Loud. Annoying, the journey rolled on into the night. Movie 4 finished, so it was time for flick number 5. A fast paced, high kicking drama delivered in a Belgian accent, the name of which I can’t remember.

At one point the grandmother tried to subdue wild child with food and drink, but the food ended up on the ground and the juice ended up on me.

The grandmother apologised profusely and continuously but it was clear no one could placate this little terror – not even Van Damme. He writhed and squirmed and yelled and started kicking and punching me, perhaps inspired by the heroics on screen or just for something different.

Eventually the bus rolled through the relatively empty city of Santiago and the passengers, some of whom had managed to sleep, and snore, readied themselves to alight. It was past midnight. I was looking forward to finding a bed and crashing.

I was joyous at the thought of getting off this bus until I realised one thing. One all-consuming, overwhelming thought.

We couldn’t stop yet.