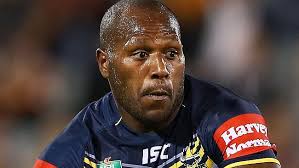 Former NRL player Robert Lui has been nominated for the Frownlow Medal Hall of Fame for charges of domestic violence during his time in the NRL.

Lui played for both the Wests Tigers and the North Queensland Cowboys but failed to complete the terms of his contract at either club due to charges and court action relating to assaulting his partner at the time.

The Frownlow Medal is awarded to the player whose off-field demeanour epitomises the values of the modern day footballer and draws attention to the status of footballers as role models to young Australians. It covers Australia’s four major football codes; the National Rugby League (NRL), Australian Football League (AFL), the A-League (Football) and Rugby Union’s Super Rugby competition. The first medal was awarded to Sydney Roosters and New Zealand representative Shaun Kenny-Dowall in 2015.

The Frownlow Medal Hall of Fame honours players who received media attention in previous seasons, for similarly scandalous behaviour, and its inductees include Ben Cousins and Todd Carney.

Hall of Fame inductees will be announced in October.